The past two years have been very eventful ones in South African cricket. There’s been changing captains, revolving openers and the big issues of Kolpaks and transformation targets.

They begin the new home season with a series against Bangladesh, featuring a new coach in Ottis Gibson and a new ODI skipper to lead them towards and into the 2019 World Cup.

The new guard, especially Gibson, have plenty to work on right away:

South Africa have been looking for a long-term opening partnership ever since Graeme Smith retired.

Dean Elgar has cemented his place, but attempts to find a partner have so far failed. The experiment with makeshift opener Stiaan van Zyl saw him struggle, while the experience of Stephen Cook saw two centuries in 11 innings, but the selectors lost patience quickly after a string of poor scores. That said, Cook was recently the best batsman in an A series against India, and might have done enough to earn a recall.

Aiden Markram is another favourite for the role. Young, and with some strong First Class performances making a strong case, he could be considered to partner Elgar. He was recently part of the Test squad that toured England, as cover for Faf du Plessis, and attracted plenty of social media attention.

The most recent choice at the top of the order was Heino Kuhn. Selected after consistent performances for the A side, and many years of runs for the Titans, Kuhn failed to make an impact in England. Like Cook, he’s on the wrong side of 30, and needs to perform soon. Though he’s received the backing of team management, that could change with the incoming tenure of Ottis Gibson.

Quinton de Kock as a Test opener is an option that could be considered. He opened when Elgar was injured for the second Test vs New Zealand in 2016, and scored 50 and 82. This is unlikely to happen because he won’t be able to keep and Heinrich Klassen would have to be roped in to take over wicket-keeping duties; given de Kock’s rapid improvement as a gloveman, this would surely be a backwards step, even with Klassen’s undoubted talent.

Statistically, the most successful recent opening partnership for the Proteas has been Cook and Elgar. Should Kuhn fail to fire against Bangladesh, it seems likely that South Africa will either revert to the Cook-Elgar pairing for the rest of the home season, or give Markram a crack.

The struggles at the top of the order have been amplified by the recent indifferent form of Hashim Amla, Faf du Plessis and Temba Bavuma – not to mention JP Duminy.

Amla, du Plessis and Bavuma have looked more assured at the crease than their teammates, but have failed to score consistently. Duminy, meanwhile, was dropped from the squad after the first Test in England and is unlikely to return any time soon.

The good news is the Test return of AB de Villiers, who has stated that he is committed to playing all formats from mid-October. Though he will miss the Bangladesh series, de Villiers will be back for the India and Australia series that follow. Should South Africa play six batsmen against Bangladesh, it could be Theunis de Bruyn who gets the chance to prove himself; likely filling the gap Rilee Rossouw would have had, if not for his Hampshire exploits.

Vernon Philander’s fitness and Dale Steyn’s shoulder problems have been an increasing frustration. Their limited participation is some recent matches has put more pressure on the rest of the bowlers, and removes a wealth of experience from the bowling pack.

Philander was excellent all-round in England, but missed most of the third Test because of a viral infection and ruled himself out of the final Test through injury.

Steyn was injured early during the first Test against England at home in 2015-16, and again during the November 2016 tour of Australia.

He has spent the last eight months working hard on his rehabilitation and has returned to bowling. With Bangladesh still over a month away, Steyn is likely to feature. South Africa will welcome his return at Test level, and will have to find a way to make him fit into their ODI plans.

Morne Morkel worked his way back to the team after fighting a potentially career-ending injury. Unfortunately, things have not changed much for him – he bowled well but failed to get enough wickets. If the team goes with four bowlers he will likely make way for Steyn, with Kagiso Rabada and Vernon Philander shoe-ins.

Duanne Olivier, the main reserve fast bowler, has played just three tests and has not made a significant impact yet. He bowled well in some spells but might have to wait for his next chance. Much as Theunis de Bruyn owes his opportunities to the absence of Rilee Rossouw, so Olivier can thank Kyle Abbott.

The probability of Dale Steyn and Vernon Philander risking injury during Tests, as well as clear failings in recent matches, means South Africa will likely look towards an all-rounder to plug that gap.

With Duminy gone, South Africa experimented with Chris Morris batting at seven during the England series. Morris was mostly ineffective as a fifth bowler, and failed with the bat.

Bizarrely, Dwaine Pretorius was left out of the England tour, given his recent form and clear ability with the bat. He seems the most suitable candidate, taking pressure off the other batsmen as well as offering a very solid seam bowling option.

Andile Phehlukwayo was part of the squad that toured England but, as it stands, has not done enough at First Class level to earn a Test cap.

Nobody would blame Ottis Gibson if he fails to earn South Africa a major ICC trophy during his tenure. But with that being said, CSA definitely had Gibson’s successful 2012 World T20 campaign with the West Indies in mind when he was appointed.

With a number of senior players – AB de Villiers, Faf du Plessis, Hashim Amla, Morne Morkel, Dale Steyn and Imran Tahir among them – possible candidates for retirement after the 2019 World Cup, it’s probably South Africa’s one last crack at a title with the bulk of one of their strongest generations.

It did not take long for Ottis Gibson to be questioned about how he will handle the political hot potato of transformation targets, and the supposed and alleged political interference within South African cricket. This is of particular interest, given Gibson approaches the job as an outsider.

The new targets have not caused too many waves yet, with enough quality cricketers of colour who would have made the team without the targets in place.

Kagiso Rabada has been excellent in all formats, and had led the attack well in Steyn’s absence. Bavuma has shown his potential by playing some excellent match-saving knocks under pressure when an experienced top order collapsed hopelessly. Andile Phehlukwayo has already won a few matches for South Africa.

The Kolpak issue seems to be done for now, with only Morkel possibly considering a move, though as always rumours swirl. This is again an issue Gibson was pressed on, simply commenting that he can only coach the players available to him, and that players using the Kolpak out is more of a concern for CSA. 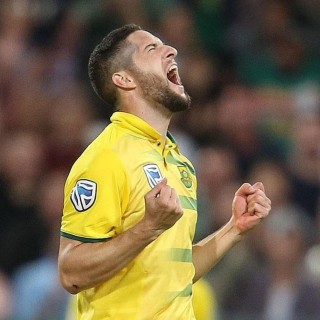