Sir David John GRAHAM, KNZM, CBE, ED (9 January 1935 – 2 August 2017) was known, and will be known for many years to come, for achievements in rugby and contributions to education – and, of course, his unwavering moral compass.

He spent more than two decades as Headmaster of Auckland Grammar School, achieved remarkable things at Nga Tapuwae College (later the Southern Cross Campus), became Chancellor of the University of Auckland, and was fundamentally involved in countless educational trusts, scholarships and initiatives: Maxim, ACG Education, and the New Zealand Education and Scholarship Trust to name only three.

And, of course, he was an All Black – enough in itself to firmly brand himself into New Zealand heritage.

Yet, as Graham conceded to me during a warm phone call last year, “I’ve kept more friends in the cricket world – have made? Kept at least – than in my All Black rugby days.”

He spent only three years as manager of the New Zealand cricket side, part of the holy trinity (Steve Rixon, Graham, and Gilbert Enoka) that changed this nation’s cricket fortunes around. From days of despair and high controversy, those three – together with Ashley Ross as assistant coach, and Stephen Fleming as captain – helped guide New Zealand to a truly historic Test series win in England in 1999.

Graham was not a man to try place the laurels on his own crown; he was humble and carried a quiet dignity not just about cricket, but the rest of his life too. He was always John, never Sir John. And he never saw himself as aloof – “I’m very glad you called,” he’d usually answer.

But while he never marketed Sir John Graham, he happily recounted and discussed his days as manager and the successes of the Rixon-Ross-Graham-Enoka quartet. When he did, a hint of pride was clear in his voice.

“You can understand that I was more than fortunate to be a part of it, you know. I was blessed, really, in my career that I was involved with that group of 15 young men. Because they just finished up a quality group of guys. Obviously a few flaws, that’s natural, but by-and-large they were first class.”

To touch on how it was achieved was to start a litany of stories, interspersed with plenty of laughs – and the occasional ‘I’m getting carried away, shut up John!’

It was things as simple as signatures.

“We had a rule about signing autographs – if a boy comes up to ask for an autograph, you sign it. You’ll have a long while, you’ll have many years later, where no-one’s asking for your autograph, so have pleasure in giving it to a young boy who’s had the nerve and the initiative to ask you for it.

“When I started, some of the guys just walked straight past. Didn’t look, didn’t stop to give autographs. I said, ‘you can’t do that, the hell are you doing? You’re not God, you stop and sign it.’ And they did, and those little things helped, as you can imagine, immensely. Because we were all doing the same thing.”

But it was also things as complex as delicate man management, guiding some of the more volatile characters of the previous New Zealand cricketing regime.

“I enjoyed managing those guys, because I got a lot out of them in the end. Because they toed the line too, that was the key to that.”

When speaking to Graham, as I was fortunate to do more than once, it was a joy to listen. “You’ve got to remember I’m an old man now, Devon,” he commented. “I forget a lot of things.”

That might have been the case, but given how much he remembered vividly, he can only have been a vault of knowledge in his heyday.

“Better Than Before was one our team mottos. Better Than Before was a great motto for a cricket team; statistically, you can’t beat it, can you? If you’d scored 20 in the first innings, 21 was better than before, simple little things like that. But it also applied to what you did off the field. We had to tidy up [our behaviour] at the airport, where the guys could be rowdy, and if they played cards they made a lot of noise.

“We cut that, we just stopped that, by saying, ‘obviously you play cards, but you’re in the public eye, so you’ve got to represent this team with care and dignity’. And the guys did, they accepted that if it was getting too noisy I’d just go up to them and say, ‘hang on guys, better than before?’

“That’s all I had to do! I didn’t have to do anything else, because they understood.”

Facial hair was another of his bugbears – he would laugh at memories of the rules they instituted. If you had facial hair at the start of the tour, you could keep it; but how it was on day one was how it had to stay.

Soon that led to thoughts of the very young Daniel Vettori, who would be the butt of jokes about not needing to shave yet; “we shared a lot of laughs,” Graham commented.

But as he conceded on the subject of facial hair, it’s now the norm – “I’m a bit old fashioned, as you can gather.”

In 1999, things could be strict, but Graham speaks fondly of the players buying into the idea of working towards a team that wanted to build a legacy, that wanted to do the Silver Fern justice.

As for what that tour win meant for a man who had achieved so much else in the world, “It was right up there, because of the quality and calibre of what we achieved, and how we achieved it. There were no scandals, and there’d been plenty beforehand as you mentioned earlier – we didn’t have any of those.”

Slowly Graham would force himself to a close – after another Shut up John! it would be, Well, there you go. Soon you’d see the side of the man that could fill young Auckland Grammar students with confidence with only a few words, and the personality that encouraged cricketers to great heights.

It didn’t need to be much – a comment wishing me luck with my writing or studies felt like a truly genuine remark. Graham would make you feel at ease, like a long-lost friend.

All the while he was fighting a long battle, albeit one he faced with a smile. He’d chuckle as he commented that “I’ve just had all the bits and pieces I have to do most days to keep going.”

Our last conversation ended with me promising to meet him for coffee and more cricketing conversations next time I was in Auckland:

“That would be lovely, I’d really enjoy that if you’d do that, yes. It’s nice to be asked to do something like this.”

Obituaries lend themselves to being cold and distant, often reserved. But from a personal point of view, that I never managed to make this happen will forever be one of my deepest regrets.

But the final word stays with Graham, whose comment on the team environment they created in 1999 is one you can easily imagine him using to describe his life as a whole: “It wasn’t perfect, but it was very, very good.” 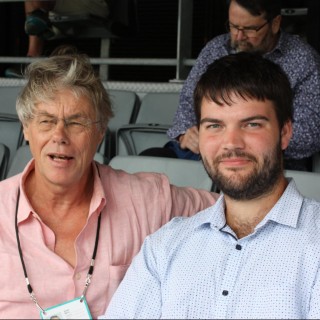 I try to stonewall, bowl leg spin, field in close and sledge relentlessly, but in reality I'm usually out injured. Now retired and trying to coach. Just as rubbish with a pen as with a bat.